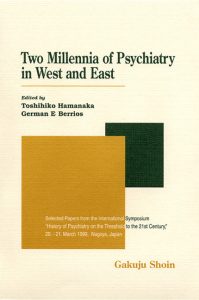 About this book
This volume includes a selection of papers presented at the “History of Psychiatry on the Threshold to the 21st Century in West and East” International Symposium which took place at the Medical Faculty of Nagoya City University (Nagoya, Japan) on 20.-21. March 1999. Organized by the Department of Psychiatry of Nagoya City University, this interdisciplinary meeting was the first of its kind to be held in the Far-East including Japan. The meeting was attended by about 100 scholars from Korea, China and Japan, Europe and America and about 40 papers were presented.
Since the Second World War, and particularly after the important Yale symposium of 1967, the historiography of the history of psychiatry has changed in interesting ways. A host of factors have been involved in this change. Firstly, and in response to the influence of Bachelard, Foucault, Canguilhem and Ackerknecht the long term relationship between psychiatric history and traditional medical historiography was severed; secondly, there was the growing influence of the new history and philosophy of science driven by the early work of Toulmin, Hanson and Lakatos. Thirdly, there was the ‘antipsychiatry movement’ which during the 1960s challenged the usefulness of the medical model in psychiatry and emphasized its social and political aspects. It did not take long before professional historians, sociologists, classicists, social anthropologists and other scholars from the humanities moved in and helped the history of psychiatry to be the thriving discipline it has become.
The book includes three sections: Part 1 is dedicated to developments in Europe; Part 2 concerns the history of psychiatry in the East; and part 3 deals with specific themes and cultural contexts. The editors would like to express their gratitude to the many who supported the organization of the Symposium and the publication of this book. Inter Alia, they should like to mention Osaka Pharmaceutical Manufacturers’ Association, the Section on “History of Psychiatry” of the World Psychiatric Association, the Japanese Society for the History of Psychiatry, the Society of Psychiatrists and the Association of Psychiatric Hospitals from Aichi- Prefecture and last, but not least, Nagoya City University. (From “Preface) (Toshihiko Hamanaka and German E. Berrios)