Being Irrational
Lacan, the Objet a, and the Golden Mean 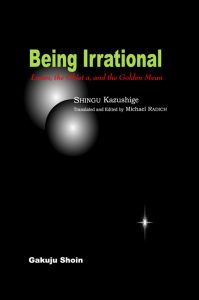 CHAPTER ONE: THE PSYCHOANALYTIC ROMANESQUE
One: Starting at the Very Beginning
Two: Nadja and Breton
Three: Aim?e and Lacan

CHAPTER FIVE: BECOMING OTHER
One: The Objet a Within the Discourse of the Other
Two: The Murder of the Thing
Three: Repetition (I)
Four: The Theory of the Mirror Stage
Five: Repetition (II)
Six: Symbolic, Imaginary, Real
Seven: Schema L and the Mirror

CHAPTER SIX: ALL ALONE IN PARIS
One: The Unary Trait
Two: The Ecole Freudienne de Paris

CHAPTER SEVEN: WAITING FOR THE AGALMA
One: The Object of Psychoanalysis
Two: Socrates
Three: Irma
Four: In the Mouth

CHAPTER EIGHT: THE DISCOURSE OF PSYCHOANALYSIS
One: The “Pass”
Two: The Four Discourses
Three: The “Discourse of the Master” and Oedipus
Four: Towards the Place of the Impossible
Five: The Final Failure
Six: Encore, Lacan!

About this book (From “Translator’s Foreword”)

This book was originally published in Japanese as Lacan’s Psychoanalysis (Rakan no seishin-bunseki), and under that title it is the best-selling and widest-read introduction to Lacan in Japan .  It is my belief, however, that the specific insights it affords into the objet a will make it fruitful reading for a much broader audience than the one it is confined to in Japanese; for this reason, I gladly accepted when Professor Shingu kindly offered me the chance to translate it.

Professor Shingu and I have together chosen a new title for the English edition ? Being Irrational: Lacan, the Objet a, and the Golden Mean ? in keeping with the relevance we hope its unique exposition of the objet a in particular will hold for an English-reading audience.  The objet a is a seminal notion in Lacan’s thought, and Bruce Fink has justifiably remarked that an entire book would be required to explain it fully.  While Being Irrational is not a systematic exposition of all the different formulations that have been given to the objet a, it is, in a sense, just such a book.  It is ground-breaking in that it develops a hint from Seminar XX (along with a few pieces of algebra from Seminar XVII) to the effect that “the objet a is the golden mean”, and makes of this notion a key to Lacan’s entire theoretical edifice.  This is the “being irrational” (or “irrational being”) of the title.  As we see in Chapters III and V, it is “irrational” both in the ordinary everyday sense of the word ? emotional, and not amenable to “logical” understanding ? and also numerically: the golden mean is an irrational number.

In addition to the change of title, various other changes were also made in the course of the translation.  Quotations, theoretical concepts, and details from Lacan’s biography have been sourced.  References to Japanese culture that would be lost on an outside audience in their original condensed form have been expanded.  The translator and author have also co-operated to modify the text slightly in places, to make it read smoothly in English.  In achieving the latter aim, we decided to move paragraph divisions in places, and we have also introduced some introductory and conclusory sections at the beginning and end of structural units such as chapters and sections.  All such changes were made with the author’s careful approval.  In the few cases where changes bear on content, or where substantial passages were added, the fact is noted.

A note is also required on the use of the pronoun “I”.  In many passages, I have decided after consultation with Professor Shingu to translate the Japanese first person pronoun watashi as “I”, but to use the third person form of the verb with it (e.g. “I is an other.”).  In so doing, I hope to convey a peculiarity of the Japanese of the original text.  Verbs in Japanese do not conjugate for person, and there are no articles, so that both “I am an other”, for example, and “the ‘I’ is an other” would be expressed in exactly the same way: Watashi wa hitori no tasha de aru.  Throughout the book, Professor Shingu talks about watashi (“I”) in discussing the vicissitudes of the Lacanian subject, and in Japanese, these passages not only read as natural ways of phrasing an objective consideration of “the I”, but also as bearing quite intimately on the person of the author and/or the reader: “I”.  Inspired by the Rimbaudian “I is an other” quoted at the outset of Chapter V, we decided to compromise between the personal “I” (as opposed to the distancing “the I”) and the objectifying use of the third person.  We hope that this phraseology, even if it reads strangely in English, will convey something of the double import of the argument, which implicates the person of reader, writer, and translator even as it is, at the same time, a universal consideration of human subjectivity as a category.

■About the author and the translator

Shingu Kazushige is a psychiatrist, and Professor of Human and Environmental Studies at Kyoto University, Kyoto, Japan. He was recipient of the Suntory Award for Academic and Cultural Works in 2000, and has also received the Research Award of the Japan Society of Pathography. His major research interests are: the unconscious structure of psychopathological experiences; the relationship of psychopathology to creative activities; and the psychosocial import of dreaming. He is the author and co-author of many books on clinical psychiatry and psychoanalysis, and has long been engaged in the development of Lacanian theory and clinical practice in Japan, particularly as the Japanese secretary of the Groupe franco-japonais in the Champ freudien, which is led by Judith Miller.

Michael Radich comes from New Zealand, and is currently a Ph.D. student in Chinese Buddhism and intellectual history at Harvard University. He lives in Cambridge, Massachusetts with his wife, Amanda Jack, and their daughters,。